Josh turned 41 last week. What do you get for the guy who loves growing stuff, but already has 10 apple trees, 3 pear trees, 3 cherry trees, and more plum trees than we can count?

We’re continuing to get to know our property and all of the things that already thrive here. Our dog Dusky, for example, enjoys rolling in very odiferous wild animal poop out in the back field; we assume it’s a resident coyote, though we’ve never seen any evidence beyond scat and 2 dead ducks.

We have several mystery nut trees that revealed themselves to be heartnut in early September–a sweet type of walnut.

I’ve gotten to know the resident rat colony, which is thriving, thanks in large part to our dogs’ and cat’s efforts to scare off all of the feral cats that used to patrol this property before we arrived. Managing the infestation in our barn and chicken coop has challenged my permaculture principles.

And, of course, apple trees. We have a lot, and we’ve enjoyed watching each one ripen, tasting the fruit, and speculating about what variety it might be.

We know that at least 3 are Yellow Transparents, the earliest variety that ripens around  July with a soft, bland flesh and a pale yellow-green skin. They’re Ok for making applesauce, but most of our bounty (and they are bountiful) went to the pigs, who thought they were fantastic.

Why would anyone plant Transparent apples, we wondered, given all of the other tastier options? They are the cold cereal of the apple world: serviceable, but nothing to write home about. But they show up in backyards all over Bellingham, and usually litter the ground with unwanted mealy fruit in mid-summer.

Our neighbor, who knows everything about plants, answered this question. He told us that “in the old days” apple trees were planted in 3s: Transparent, Gravenstein, and King. Transparents are a universal pollinator, with a reliable flowering season that overlaps many other varieties, even those that ripen later. They weren’t planted for their fruit, they were planted for their flowers. So if you’re ever at a backyard party, and someone is wondering about the tasteless Transparent apple tree planted by a former owner, you can show off your new knowledge and pipe up, “It’s a universal pollinator! Like type O blood!” Then wait out the awkward silence before someone changes the subject.

In proof of our neighbor’s theory, we also have 2 Gravenstein and 2 King apples, and 3 mystery varieties that ripen in early and late summer.

What we don’t have is apple trees that ripen in late fall, right before the first frost. And late-fall apples make the best cider. And I really love hard apple cider.

So for his 41st birthday, Josh received a gift certificate to Raintree Nursery and a cider press. 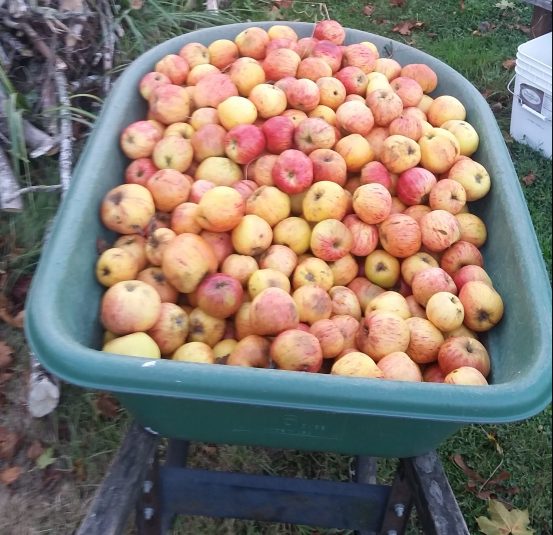 We did a trial run last weekend with the 2 varieties that are currently ripe–the King and a mystery small apple that resembles a Red Delicious–and 10 gallons of apples and 1 1/2 hours of effort yielded 2.25 gallons of liquid gold fresh-pressed apple cider.

Can I get an amen?

I’m looking forward to adding a bittersharp variety of apple, like Foxwhelp or Kingston Black, to round out the flavor profile of our cider in future years.

2 thoughts on “Turning apples to gold”