I’ll go ahead and call it what it is…a mid-life crisis. Some dudes get the hotrod, maybe take up skydiving, cross-fit, or some other exhilaratingly risky hobby. Myself, I’ve purchased way too much land and plan to farm it with almost no experience whatsoever.

Probably. Now, you should know that I can operate a shovel with a deftness and pizazz worthy of Bruce Lee’s nunchucks at the ping-pong table. As a former pro landscape constructor, I can move, retain, irrigate, trench, sculpt, and plant-out earth pretty good.

But, seven acres is around 56 times as large as the city lot that took Gwen and I 8 years to develop into an inspiring and decently edible landscape. So, by extrapolation, we will be 224 when this place is done…

Of course, a garden is never “done.” It is evolving. It is always in process. For better or for worse. And “better” in my mind is an ecological succession that steers towards more and more biodiversity. Enough of this and that to step in when needed to balance the scales. Not too much of one thing potentially susceptible to disease or attack.

It is my belief that a diverse succession starts at ground zero. In the dirt. In the soil, to be more specific. My definition of which is: an intricately structured, yet pliable playground for microorganisms that allow easier access to minerals and nutrients. You know, that spongy dark medium that holds moisture when its dry, but is never too saturated when its wet. The good stuff.

Now there’s not a lot of that good stuff here. Mostly we are compacted clay pasture and super weedy paddocks from past over-grazing. The chicken run has nearly turned to ammonium from the years and years of too much nitrogen.

That’s where the carbon comes in. Carbon is life. It comes in woody, weedy, grassy, leafy, buggy, and even fleshy. Well, we’ve got TONS of those things and especially the first two. I think of returning the excess carbon as feeding the soil, just like feeding our pigs or chickens.

On our previous urban 1/8th acre, once I gave up my war on the weeds and began returning all the excess organic material to the land, including and especially said weeds, the magic happened. Fertility went up. The need for irrigation went down. Balance and ease showed up little by little. I even began to see my once arch nemesis, horsetail, as an asset. (Word is, a tea from it will keep powdery mildew at bay – something I hope to put to science soon). 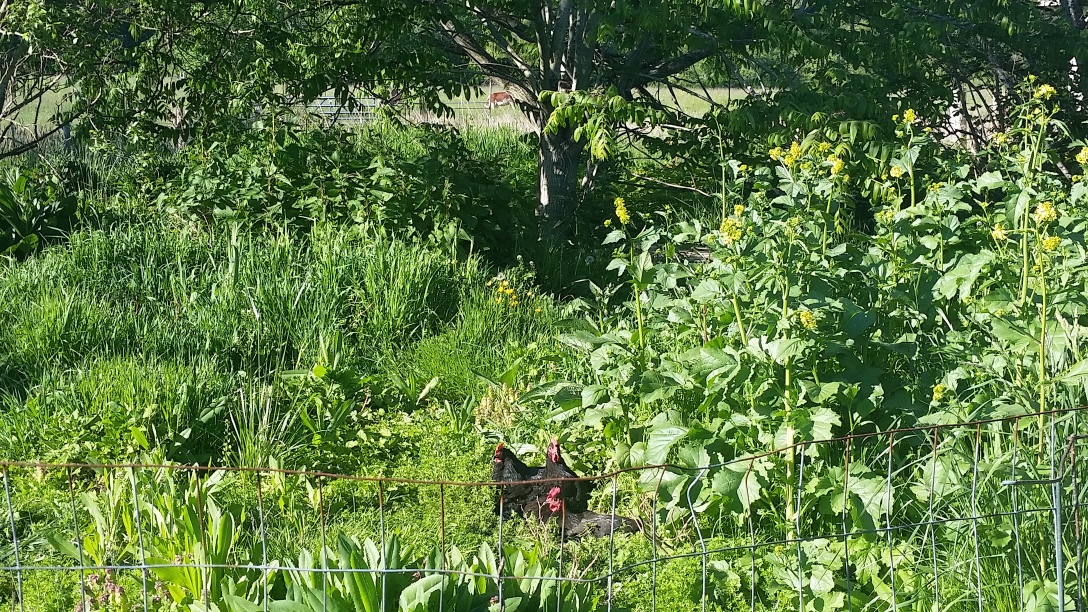 Too, I let the more desirable things go to seed and voilà! they came back the next year. No planting. Birds and squirrels buried other seed for me. Perennials like asparagus and fruit just kept on giving. My own work went way down. The garden’s production went way up. And the awe was simply keen as more and more order seemed to come out of the chaos.

On these seven green acres, there’s gonna be a heckuva lot of work to be done the first years, but I am confident that as time goes on, the workload will lessen as the natural systems take care of themselves more and more. After all, it makes sense that the more living things are in below the soil, the more there will be above.

And that is my definition of success.

The Wild Wisdom of Weeds

One thought on “A Dirt Farmer’s Success(ion)”