We’ve been quiet in Blogville, but it’s not because nothing is happening. SO MUCH is happening. We’re starting our second spring at Bellfern, and–dare I say it?–it feels like we’ve got our feet under us. Our disasters are fewer and farther between.

In early April, we castrated the piglets, and yes we learned how to do it from YouTube. We decided not to take photos and video, because the video we learned from is so great I’d rather you watched it (if you want to watch piglets getting castrated):

I thought I’d have a hilarious “I’m-a-farmer-now” blog post out of that event, but really it was such a non-event that I don’t have much to say about it. It went down exactly like the YouTube video, and it was over in 15 minutes. My intrepid friend Audrey came over and held the piglets, because Josh can be squeamish when animals are in distress, which is really a wonderful and human sort of trait, and I wasn’t sure if he could power through. He was fine, and he promised to be a full participant next time we have to do it. So, piglet castration. Check.

Progress on the House

Although we write most of our farm updates about the farm, we actually live in a house. A house that was built in 1916. Like most houses built a century ago, you can see glimpses of different eras and the families who once lived here.

The kitchen is a space that was designed and much loved by the previous family who lived here, and I love that they loved it. They’re great people. But it was top of my list of rooms to do over. My dad came in early April to help us check off this particular wishlist item.

This is what the kitchen looked like when we moved in:

It was dark; 2 little can lights lit the whole kitchen. The cabinets, finished in a “natural” tone that was super popular in the late 90s, were about 15 years old, and the finish was disintegrating where years of greasy fingers had touched them. The appliances were delaminating around the controls. The cabinets stopped 3 feet short of the east wall, for no clear reason, and we filled the space with a roll-in cart. It was turquoise.

We replaced the appliances just a couple of months after we moved in–since I spend many hours cooking and processing food in the kitchen, that upgrade was urgent. Next most urgent was the turquoise paint job, which my mom helped me conceal with Sherwin Williams Westchester Gray last fall.

During this most recent phase of the do-over, Dad and Josh started by knocking out the wall between the dining room and the kitchen and raising the height of the entry.

Getting ready to open up the wall

So open! Much better.

Dad rewired the lights and added some new pendant lights to hang over the planned breakfast counter, attached to the back of a new cabinet.

We added a new butcherblock countertop, a stick-on aluminum tile backsplash, and a live-edge maple slab at breakfast-counter height. 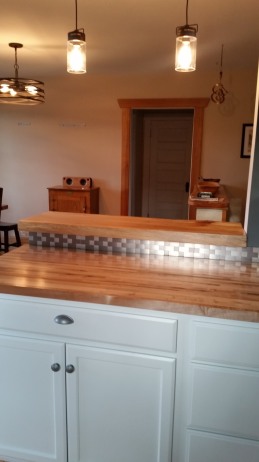 I took down all of the cabinet faces, sanded, and painted them, which seems like a minor detail when compared to wall removal, but it took nearly 10 days of prep and spraying, and I’d like some credit, too, please.

Now that it’s reassembled, the kitchen is glorious. We eat nearly every meal at the maple slab breakfast counter, and the full-size dining room table where we used to eat is slowly being buried by tools and unopened mail, like a normal family.

The kitchen is still not finished; we managed to install a small piece of the new countertop, but it was a huge bother, and Josh decreed that no further kitchen work would be done until it starts raining again in October, so we’re stalled for now. Here’s a glimpse of the new countertop that will one day fill the whole west wall:

After the new counter is fully installed, there’s new flooring to put in, plus some trimwork and tiling, and…

You know how it goes. It may never be completely done, but it feels good to pay some attention to the house for a change. It often takes a back seat to farm animals, vegetables, fruit, and drainage projects.