Right now (in late May) we have a dozen (small) bales of hay in the barn. And we did it all by hand. Every step, from scything to stacking, with no tractor power.

As for the why, the reasons are many.

Is it worth it? Monetarily, no. A heavy bale of local non-sprayed hay is only 6 bucks. But, when you factor in ALL of the above, I reckon it is worth it.

And why don’t we use a tractor? Unfortunately, NW Washington is not an agricultural hotbed, and you can’t get affordable used equipment out there. For us, there’s no cost justification for a full haymaking setup on our small acreage. And we don’t have any near neighbors who have the equipment either.

So without other options, we’re doing it by hand. Yes, it is a TON of work. But, none if it is really that terribly backbreaking. I mean, hay is light. Especially when you do wee tiny cute bails like we did (they’re maybe 20 lbs). There are just a lot of steps. And weather can kick you in the pants, like we found out this week with a few days of rain on our freshly dried hay!

So, first is cutting. It took me two decent days to cut 2/3 acre. When scything, you can cut a swath about 10 feet wide and the arc action of the scythe lays 95% of the grass to one side in a neat line called a windrow. This row then must be turned and spread and fluffed (the technical term is “wuffled,” which is almost better than fluffed) to dry over the course of the next 4-5 days depending upon conditions.

Again, its all pretty light work, there’s just a lot of it. Its all very quiet, except for our farm dog Ursula, who begs us to throw her ball deep into the uncut grass so she can practice sniffing it out.

The hardest and newest part for us was baling. Gwen and I researched homemade hay baling and found that basically you stuff the hay into a box, tie it up, and pull it out. Sometimes people rig up a plunger to smoosh the hay, but that seemed excessive. Gwen found a $34, 23 gallon sturdy plastic garbage can at a hardware store that fit the bill for us. 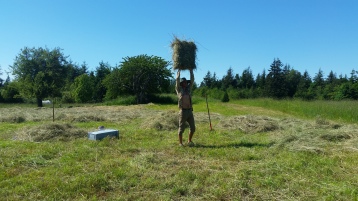 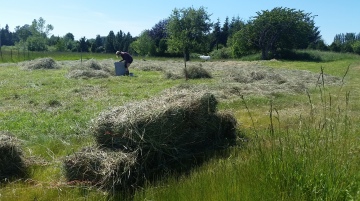 It was late on a hot day when we attempted the process and we only got in a couple hours before petering out. We did a lot of trashcan yoga, balancing and bouncing on the hay in the bin to compact it. We learned to tie a bailing knot (also called a packer’s knot), and agreed that pulling out the load was not actually “80% easier” as advertised on the outside of the trash bin.

So, we didn’t finish baling everything I had cut and dried over the weekend, and we had to go back to work. Then, it rained. And rained again. Good thing there’s about 3 more acres to cut, by hand. Yippee!!!

You can watch the scything and the baling (both with panache) here: