Shortly after it became apparent that Hypatia was going to become the matriarch pig of Bellfern Homestead instead of Eliza as intended, her name morphed into Honeybunny. Hypatia seemed an appropriate name for a creature too smart for her earthly form who was destined for an unfortunate end, but Honeybunny seems more fitting for a mistress.

Pigs have a gestation period of 114 days, which is easy to remember with the addage “3 months, 3 weeks, and 3 days.” Honeybunny’s due date was last Wednesday, but she wasn’t showing any signs of imminent farrowing (the pig-specific word for birth), which include lactation and nest-making. Finally, mid-day on day 117, she had a snack of cottage cheese and then immediately went to work moving all of the hay in her hut into a giant mound. She was moving that hay with a purpose, and we knew we were finally starting the countdown.

Nest-making usually happens within 12-24 hours of birth, so when this behavior started at 3 p.m., we thought we’d be looking at an early-morning farrowing the following day. We had a nice corned beef dinner to celebrate St. Patrick’s Day, and went out to check on her after cleaning up. To our great surprise, we found her in active labor. We could see the muscles around her vulva contracting, while she laid on her side in a trance-like state. I headed back into the house to get a bucket of hot water, soap and a towel (at the good advice of James Herriott). In the time it took me to walk back to the house, our neighbor came running over to let me know the first one was out! 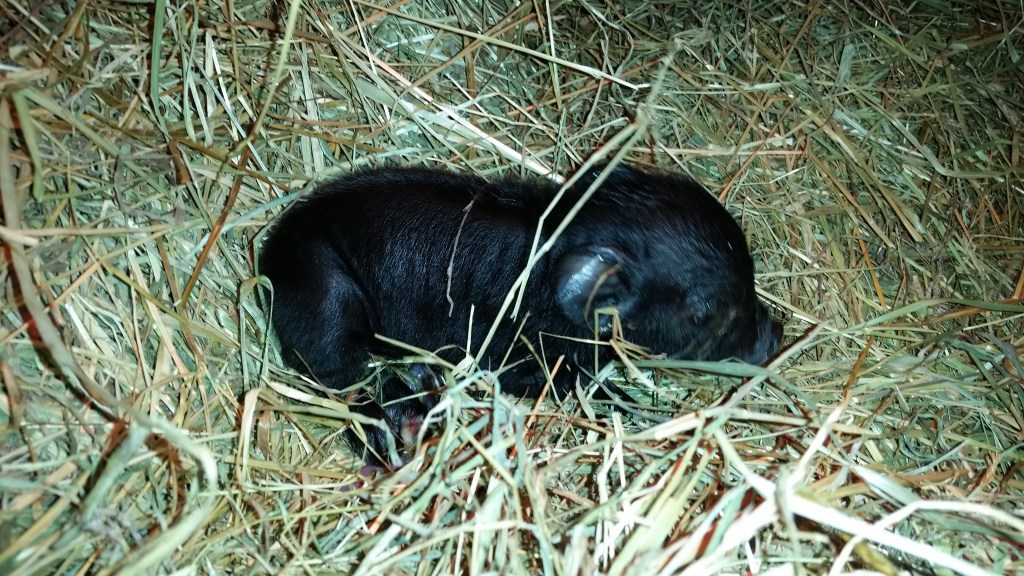 Pigs usually birth one pig every 10-15 minutes, so Josh and I settled in the corner of her hut, whispered encouragements, and tried to generally stay out of her way and not distract her. But then 20 minutes passed, and another 20, and I started to get concerned. One hour between piglets is the signpost for a problem. If you pass the one hour mark, and you know there should be more pigs coming, then it’s a sign of distress. At one hour and 5 minutes, I soaped up, rinsed, then thoroughly lubed my hand and arm and went in. (She wasn’t crazy about this, but wasn’t as upset as you might expect.) I was expecting to find a big fat piglet stuck just behind her pelvic bone (they were 4 days late, after all), but to my relief, I couldn’t feel anything. So I withdrew, rinsed off, and 3 minutes later a great big boarlet popped out.

From then on, the rest came in intervals of 1 to 10 minutes, and in the course of a 2 hour farrowing, we had 10 wriggling piglets! They were all born without problems, and none of them required our intervention. Nonetheless, we did vigorously rub each one and relocate to a heat lamp until mom was done to avoid getting crushed. She occasionally got up between births to gulp down water and rebuild her nest, but she wasn’t very aware of what was going on around her.

After piglet 10, she seemed to calm a little, so we brought the piglets back to let them suckle. The mom produces colostrum for the first 24 hours, so it was crucial to get them nursing as soon as possible. I was concerned she would freak out about these parasitic creatures latching onto her, but I might have been projecting my own fears. She was unphased, and they all latched on and nursed themselves to sleep.

Although the whole event was over by 11 p.m., we were concerned about the piglets getting crushed in the night by an enormous and exhausted mama, so Josh and I took turns getting up every 2 hours to check on them. Twice during the night we pulled the piglets off moma’s teats and stuck them back under the heat lamp, and she seemed to really appreciate the opportunity to get up, drink water, and relieve herself without having to worry about accidentally stepping on them.

We’re not out of the woods yet; one of the 10 is very tiny and might not survive. And accidental crushings are very common in the weeks following birth. But it’s a promising start! All of my fears about problem births and the piglets being rejected by the moma have not come to pass.

If you’re the curious sort who wonders what a pig farrowing looks like, I managed to get a bit of graphic video of her last two piglets entering the world.