Josh and I grew up in the Midwest–me in Illinois, him in Ohio and Iowa. At some point in our childhoods, we both came across the game “Pig Mania,” and it’s not because it was a virally popular game at any point in history, not even in the Midwest. It’s a dice rolling game, except that the dice are little plastic pigs. You score points based on the position the pigs land in. A pig balanced on its snout and forehoofs is a “snouter”–5 points. A pig on it’s back is a “razorback”–5 points. If the pigs touch as a result of your roll, it’s called “makin’ bacon” and you lose all of your points and your turn. (Josh recently purchased a 1977 edition of this game in a fit of nostalgia. It’s a fun way to spend 15 minutes every couple of months.)

That was a long setup to say that the phrase “makin’ bacon” is forever fixed in my head as an innuendo. But this post is quite literally about making bacon.

When we processed our first AGH last month, I was very nervous about the quantity, quality, and potential absence of bacon. AGH are lard pigs, not bacon pigs, and one butcher that I called about possibly processing our small-breed pigs warned me, “Well, you won’t get any bacon out of them.” Not get bacon?! I know vegetarians who “make exceptions” for just one meat in all the animal kingdom–and that is bacon. It’s the holy grail of pork. How could we go to the effort of raising heritage pork, butchering it, and have no bacon to show for it?!

I harrumphed and called another butcher, and that butcher did not make fun of my pigs or tell me that bacon was hopeless.

Several weeks later, I got to find out whether an AGH hog would yield enough pork belly to make bacon. It did! Our side of AGH yielded a 6 lb slab of pork belly. Much less than a side of conventional pork, but still a decent size. It’s got a lot more fat than the bacon you might buy at the supermarket, but we expected that. The motto with this pig is “embrace the fat.”

I followed the bacon recipe at Paleo Leap, except that I reduced the salt and tripled the honey (and also subbed it for molasses).

The bacon was refrigerated with this dry rub in airless ziplocs for 7 days. After 7 days, I removed it from the liquid, rinsed thoroughly, then dried on a cookie sheet in the fridge for 12 hours.

I lit the ceramic kamado grill and held it steady at 200 deg, added chunks of soaked hickory, and then smoked my slab bacon until it read 155 degrees. It took about an hour.

I let the bacon cool in the fridge overnight, then moved to the freezer for 15 minutes prior to slicing. You want it to be COLD before slicing. 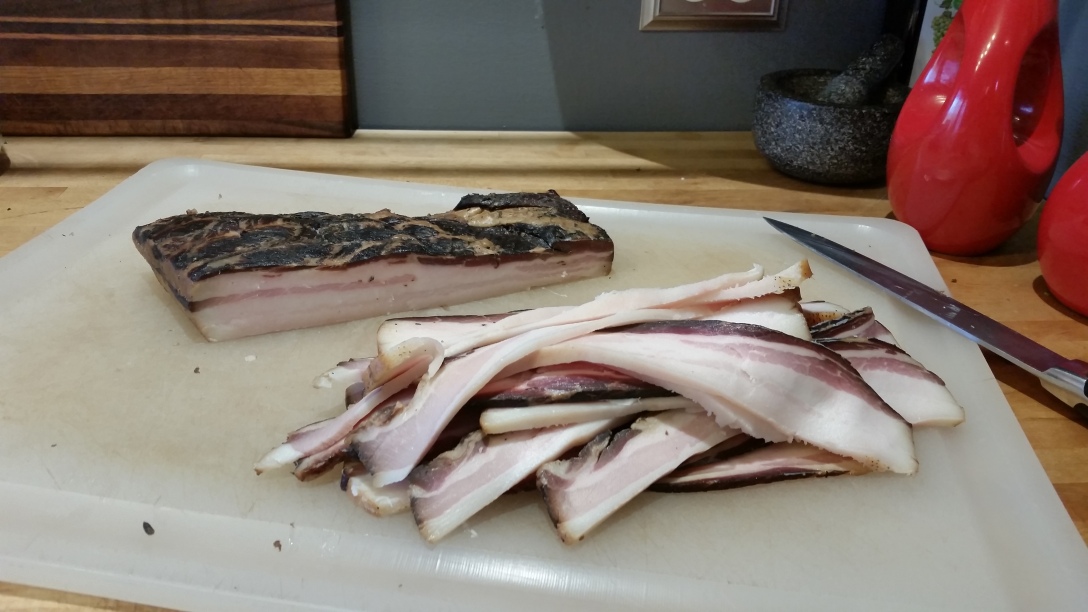 After all of this work, the taste test was a tense moment. Let me spare you the same suspense.