Its been 9 months to the day since we moved from our tiny urban lot to these 7 acres.  Included in the deal was a mostly-renovated farmhouse, two leaky unswept barns, “the chalet,” “the bakery,” and a laundry-shed-cum-chicken-coop/rat factory. All of which, including the pastures, paddocks, and ancient apple trees have been unlimited sources of projects.

As you might expect, last Spring, the barns were full of farm-y stuff. From a cracked wheelbarrow to fencing. From the original bottle of Round-Up to a scroll saw with a bad switch. Junk? Useful?…No idea. So, most things stayed and were leaned up against the walls eating up floor space, labyrinthine.

Until last week, when it began. Starting at one corner the tornado’s vortex swarmed. Everything pulled out, sorted, and put back…maybe. But, put back where?

Until now, I simply couldn’t have organized the barns. We didn’t know what we were doing. (In more ways than one!) And we didn’t know where we were doing it. Gardening, carpentry, plumbing, electrical, woodworking. Chickens and pigs. Lumber and fasteners of all kinds – and from all decades of the 20th century, it seems. Electric fencing, feed, hand tools, and irrigation supplies. Pulleys and ropes. 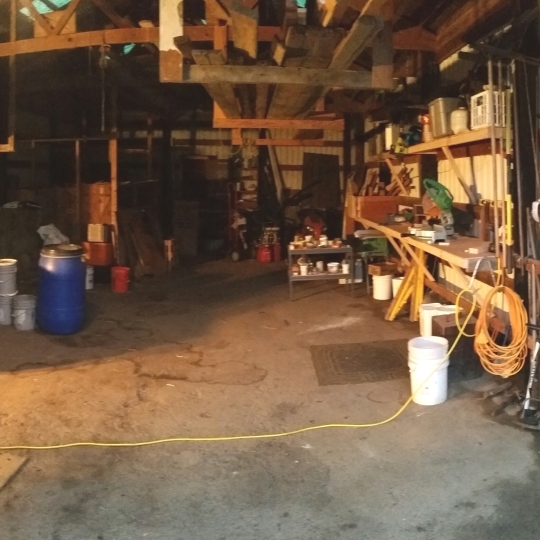 For nine months projects where riddled with, “Hey, have you seen the whosamuwhatzit?!” Or, “Where’s the such and such?!” Followed by an easy 10,000 steps per day wandering. And now nearly everything has its home. And projects seem to take half the time.

Nine months. So, what has been birthed? Systems, efficiency, and sanity. Its a good feeling and a good sign. Because on tap is a greenhouse, water harvesting, pasture renovation, heritage turkeys, and perhaps even bees. Stay tuned…